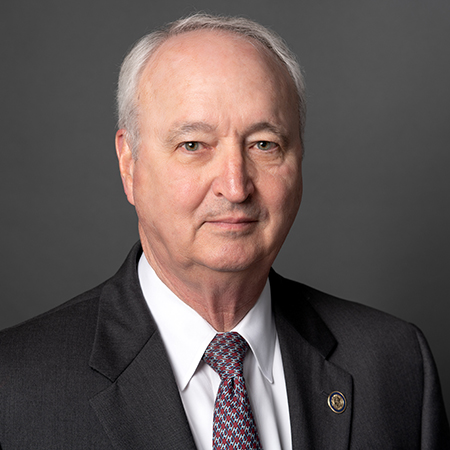 Larry W. Walther was appointed to serve as Chief Fiscal Officer for the State of Arkansas and Director for the Department of Finance and Administration on Friday, January 9, 2015, by Governor Asa Hutchinson. The Department consists of two major divisions, the Division of Management Services and the Division of Revenue. The Division of Management Services consists of the Offices of Budget, Accounting, State Procurement, Personnel Management and Intergovernmental Services; the Division of Revenue consists of the Offices of Child Support Enforcement, Driver Services, Excise Tax Administration, Income Tax Administration, Field Audit, Motor Vehicle, State Revenue Office Administration and Revenue Legal Counsel. In his position as Director and Chief Fiscal Officer, Walther also proudly serves on the Governor’s Cabinet. He was officially sworn into office on Tuesday, January 13, 2015.

Before his appointment, Walther was a member of the board of directors for the Export-Import Bank of the United States (Ex-Im Bank). Walther was nominated by President Obama on July 21, 2011, confirmed by the U.S. Senate on November 1, 2011, and sworn into office on November 14, 2011, for a term expiring on January 20, 2013, and continued to serve on the board until July 20, 2013.

Walther spent 2008 as the Director of the U.S. Trade and Development Agency (USTDA). Walther assumed his duties as Director following his confirmation by the United States Senate on March 14, 2008, and official appointment by President George W. Bush. As the Director of USTDA, Walther applied his private-sector expertise in helping to open commercial opportunities for U.S. firms overseas and in so doing, facilitated mutually beneficial partnerships. The USTDA advances economic development and U.S. commercial interests in developing and middle-income countries. The agency funds various forms of technical assistance, early investment analysis, training, orientation visits, and business workshops that support the development of a modern infrastructure, and a fair and open trading environment. USTDA’s strategic use of foreign assistance funds to support sound investment policy and decision making in host countries creates an enabling environment for trade, investment, and sustainable economic development.

Prior to his assignment at USTDA, Walther served for over three years in Governor Mike Huckabee’s Cabinet as the Director of the Arkansas Department of Economic Development (ADED). As the Director of the ADED, he was responsible for the overall direction and management of the Department and for representing the Governor and the State on all matters concerning statewide issues of economic development.

Previously, Walther had an extensive career with SBC Communications, now AT&T. Starting as a Switching Engineer for Southwestern Bell Telephone Company in 1970, he concluded his 30-year career at SBC as the Vice President for Corporate Services and Chairman of the SBC Foundation. In that capacity, he oversaw a philanthropic organization that managed $67.4 million in community and charity giving. In 1989, he was chosen as one of 20 private-sector executives to serve a one-year appointment to the Bush Administration and was assigned to the U.S. Department of the Treasury.

Walther has served on the Board of Trustees of the College of the Ozarks in Point Lookout, Missouri, since 1992, serving as the Chairman of the Board from 2001 until 2007. In December 2010, Walther was elected Treasurer of the Republican Party of Arkansas and served on the Executive Committee on the Republican Party of Arkansas. In addition, he served on the Board of Directors of Arkansas Easter Seals. Mr. Walther has also been a member of the Executive Board for Quapaw Area Boy Scouts, the University of Arkansas Walton School Of Business Board of Visitors, Downtown Little Rock Rotary, and the University of Arkansas Medical Sciences BioVentures Advisory Board. He is also actively involved in the Fellowship Bible Church in Little Rock, Arkansas. Walther and Janice, his wife of over 49 years, have two grown children, Bill and Mandy, and seven grandchildren.

Our Agency's mission is to provide assistance to all state agencies to ensure uniformity, accountability, and efficiency in the management of human resources, material, and financial resources necessary for agencies to perform their missions, and provide Arkansas citizens convenient, effective, and courteous service which will encourage voluntary compliance with tax, license, and child support laws.

Not quite finding the information you are looking for here?